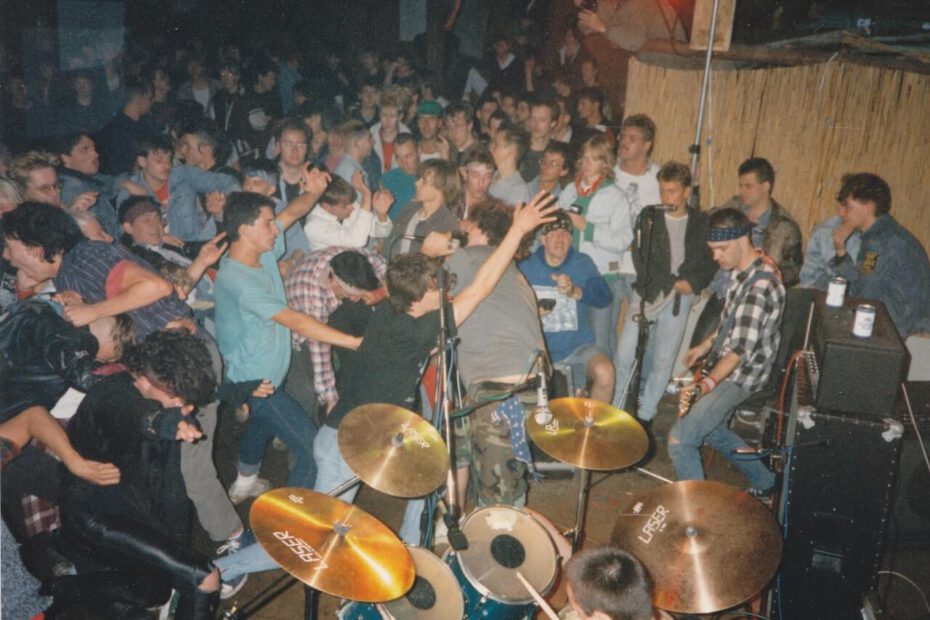 Refuse Records just released a discography of the 80s German hardcore band SKEEZICKS as a double LP. Robert, who runs the label, asked me to write some liner notes. Here they are:

SKEEZICKS’s 1986 debut EP (“There’s A Charlie Brown in everyone of us”) has it all. Cover artwork by the legendary Brian Walsby, a SUICIDAL TENDENCIES rip-off band logo, 7 blasts of short, basic hardcore, and it was on X-Mist, one of the hottest labels at the time – and one of the best and most dedicated German labels to this day.

The EP’s got a raw charm that makes you think these guys were primarily a bunch of friends (two of them were brothers) who decided to learn instruments (more or less well) and have a go at it, just for fun. That’s very punk. And: there was a phone number on the back cover. So you could call the band and ask them to play the gig/party/wedding in your town.

Still, when I first heard SKEEZICKS, I wasn’t impressed. Musically, it seemed like they couldn’t decide if they wanted to be like NEGATIVE APPROACH or like 7 SECONDS – who at that time were already on their way to boring “New Wind” land.

SKEEZICKS had lyrics against Berlin, the Chaos Days, and sang about how they loved “livin’ on (sic) the country”. As a West-Berliner city kid, I took it personally. I wanted my music and lyrics with angst, anger, and chaos. Why would I listen to SKEEZICKS when I could instead listen to MALINHEADS and VORKRIEGSJUGEND? To this day, I dislike self-referential songs like “We are ….” and songs about the scene, friendship, unity, and joining crews. That’s wasn’t punk to me.

Today, I must admit that what I didn’t like back then is exactly what made SKEEZICKS great. They went against the grain of what was a stagnant Deutschpunk scene back then. SKEEZICKS didn’t invent the US-influenced bandana hardcore in Germany, but they were early in that scene, the band started in early 1984. They co-invented slamming in Southern Germany I guess.

When it comes to releasing vinyl, they came after HOSTAGES OF AYATOLLAH, SONS OF SADISM, and their friends SPERMBIRDS. Like few others, they strictly eliminated any trace of the clichéd Deutschpunk in their music and their lyrics.

SKEEZICKS helped build their own scene deep in the Black Forest, got their friends together (to join their crew, and to not forget the fun) and gave the one-finger salute to everything they didn’t like. And they played a lot across southern Germany and also in Belgium and Holland. They never played in Berlin – and never played any Chaos Days I guess.

But nothing lasts forever. European bandana hardcore also became a trend and some of the influential bands tried to became more rock. Still, of all the “Trust” bands – CHALLENGER CREW, EVERYTHING FALLS APART, SKEEZICKS – the SKEEZICKS played the longest and had the biggest recorded output.

It’s great that labels of fans keep SKEEZICKS output available on vinyl. This release gives you another chance to (re) discover the band.

You can buy the record now from X-Mist, where it originally came out or from Refuse Records.

Heyho, we use cookies on this website to give you the most relevant experience by remembering your preferences and repeat visits. When you click the “Accept all” button, you consent to the use of all cookies. But you can also go to "Cookie settings" to individually configure your choices and provide a controlled consent. Let's go!
Cookie settingsAccept all
Manage consent

This website uses cookies to improve your experience while you navigate through the website. Out of these, the cookies that are categorized as necessary are stored on your browser. Necessary cookies are essential for the working of basic functionalities of the website. We also use third-party cookies that help us analyze and understand how you use this website. These cookies will be stored in your browser only with your consent. You also have the option to opt out of these cookies in the settings below. Opting out of some of these cookies may negatively affect your browsing experience.
Necessary Always Enabled
Necessary cookies are absolutely essential for the website to function properly. These cookies ensure basic functionalities and security features of the website, anonymously.
Functional
Functional cookies help to perform certain functionalities like sharing the content of the website on social media platforms, collect feedbacks, and other third-party features.
Performance
Performance cookies are used to understand and analyze the key performance indexes of the website which helps in delivering a better user experience for the visitors.
Analytics
Analytical cookies are used to understand how visitors interact with the website. These cookies help provide information on metrics the number of visitors, bounce rate, traffic source, etc.
Advertisement
Advertisement cookies are used to provide visitors with relevant ads and marketing campaigns. These cookies track visitors across websites and collect information to provide customized ads.
Others
Other uncategorized cookies are those that are being analyzed and have not been classified into a category as yet.
SAVE & ACCEPT